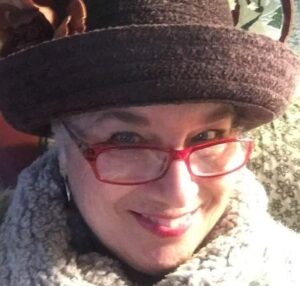 Sharon LaFrenz is 75 and has been writing since her childhood. Sharon adds, “I had my first story published in the school newspaper when I was 12. I am an American citizen, married to a German-Canadian from 1987–2019. I joined the Alberta Writers Association when I was 50, took a two-year course through the Institute of Children’s Writing in the early ’90s, and began attending the 20-day annual Port Townsend Writers Conference (attended five years in a row in the late 90’s—fabulous each year). I won a few writing contests during those years, had several short stories published in Canada, and also self-published three chapbooks of poetry, as well as serving as editor of the books of poems published each year in association with the Calgary Stroll of Poets. These days I enjoy drawing (my medium is pastel chalks), cooking, gardening, friends and family, and travel. My partner of ten years is Rudy Scalabrino. We have an adorable little Rat Terrier named Jack - or, more to the point, he has us!”

This website uses cookies to improve your experience while you navigate through the website. Out of these, the cookies that are categorized as necessary are stored on your browser as they are essential for the working of basic functionalities of the website. We also use third-party cookies that help us analyze and understand how you use this website. These cookies will be stored in your browser only with your consent. You also have the option to opt-out of these cookies. But opting out of some of these cookies may affect your browsing experience.
Necessary Always Enabled
Necessary cookies are absolutely essential for the website to function properly. This category only includes cookies that ensures basic functionalities and security features of the website. These cookies do not store any personal information.
Non-necessary
Any cookies that may not be particularly necessary for the website to function and is used specifically to collect user personal data via analytics, ads, other embedded contents are termed as non-necessary cookies. It is mandatory to procure user consent prior to running these cookies on your website.
SAVE & ACCEPT