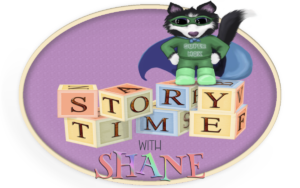 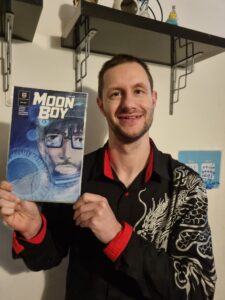 Meet the author of the young adult series The Last Child of Asgard, and the creator of the beloved character Nox the Fox, Shane S. Almond.

Shane S. Almond started his writing journey at the tender age of thirteen, where he would sit in his dormitory at school, writing fantastical short stories in his jot pad.

Shane always loved fantasy stories and dove head-first into mythology. He grew up watching old VHS tapes of Clash of The Titans, Hercules, and Jason and The Argonauts, to name a few, but instead of just enjoying them as forms of entertainment, Shane instead wanted to create his own myths, own legends, and thus Maximus Turner was born.

He released his first novel: The Last Child of Asgard: Delta in 2012, but immediately recalled it for extensive edits. The book was then re-released in 2015.

Shane released another book in the series: The Last Child of Asgard: Alpha the following year, and is now penning graphic novel scripts for both stories.

Inspired by his young autistic son, Shane has decided to try his hand at writing children’s books alongside his newest passion of becoming a published comic book writer.

Shane lives in Essex, in the United Kingdom, with his fiancée Jaynie, son Jake, and their young dog Benji and two bunnies, Honey and Smudge.

This website uses cookies to improve your experience while you navigate through the website. Out of these, the cookies that are categorized as necessary are stored on your browser as they are essential for the working of basic functionalities of the website. We also use third-party cookies that help us analyze and understand how you use this website. These cookies will be stored in your browser only with your consent. You also have the option to opt-out of these cookies. But opting out of some of these cookies may affect your browsing experience.
Necessary Always Enabled
Necessary cookies are absolutely essential for the website to function properly. This category only includes cookies that ensures basic functionalities and security features of the website. These cookies do not store any personal information.
Non-necessary
Any cookies that may not be particularly necessary for the website to function and is used specifically to collect user personal data via analytics, ads, other embedded contents are termed as non-necessary cookies. It is mandatory to procure user consent prior to running these cookies on your website.
SAVE & ACCEPT